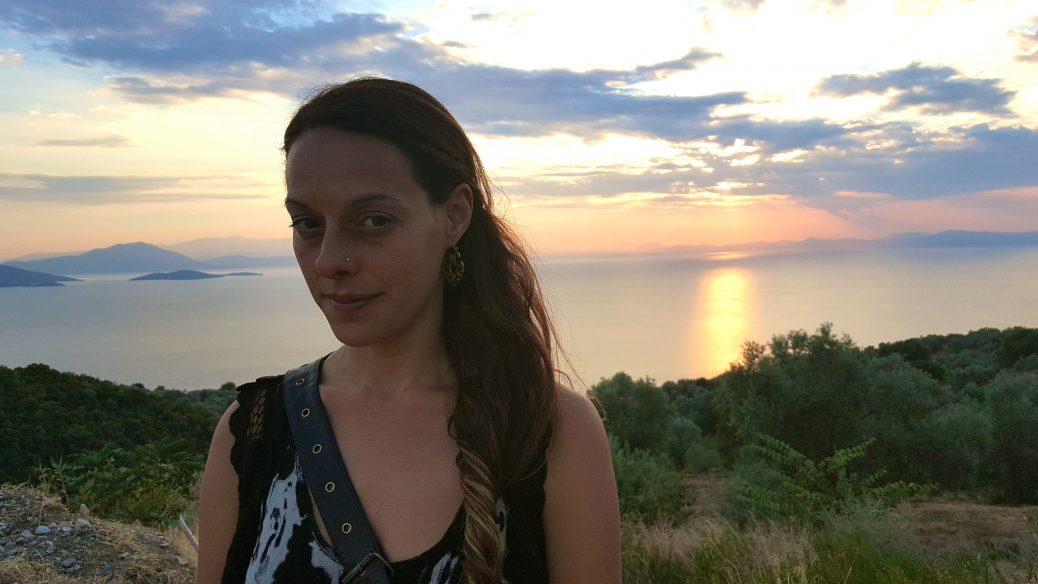 International Women’s Day plays homage to the feminine in all of us. We are seeing huge shifts occurring in consciousness which is helping us to explore and celebrate this energy. We speak with Maria Papaspyrou one of the powerful women providing a talk on ‘Reclaiming Feminine Sovereignty’ at the upcoming Ancient Futures NewEarth Festival in Bali.

Maria has worked in the UK as an integrative psychotherapist in the fields of mental health and education, alongside her private practice. Her research interests have focused on the interface between entheogenic experiences and psychotherapy as well as the intersections between the feminine and altered states of consciousness. She has given talks and published articles on the sacramental and healing properties of entheogens, supporting their re-introduction in psychotherapy. We speak to Maria about her talk and how we can all tap into the feminine qualities we all contain.

Maria thanks for your time today. Could you give us an overview of what is in store for your talk at the upcoming Ancient Futures NewEarth Festival?

‘Reclaiming Feminine Sovereignty’ will explore the links between the archetypal feminine, altered states of consciousness, and nature, within the context of our current collective alienation and disconnection from all three. Our patriarchal systems and resulting worldview have driven their true essence underground, creating a great imbalance that is at the core of our current systemic crisis. It is such times of crisis that can activate the potential for deep transformation.

The archetypal feminine can guide us towards a deeper relationship with ourselves, and by reflection with the world around us. Altered states of consciousness have the capacity to deliver us to her spaces; restore and filter her essence through to us.

The absence of the feminine is a collective wound as the archetypal feminine is an elemental pattern that we all carry within, whether we are men or women. The recovery of her force and wisdom is a collective responsibility with the aim of restoring balance.  The union of feminine and masculine, captured in the archetype of the Divine Androgyne, holds great promise for individual, collective, and systemic health, and balance. For the sacred union to be complete, the feminine needs to be reclaimed from the depths of our collective unconscious. Only then can we support the emergence of a planetary consciousness, a consciousness of interconnectivity and wholeness.

With your experience in psychology, an industry which was built on so many male icons such as Freud and Jung, there is a gender shift happening. What females past or present have inspired you in this profession and helped to lead this shift?

It is interesting to consider that the theories of the ‘founding fathers’ of psychotherapy developed out of the women of these times. The discovery of the unconscious, and from then on the foundations of psychoanalysis and depth psychology, were laid upon the misogynistic diagnosis and treatment of hysteria, which was seen to be a female affliction, and evidence of the moral, intellectual, and emotional female inferiority-a psychiatric equivalent of the witch. Without these women-who were in many cases somatising their experiences of suppression-the theory would not have developed. Interestingly, many of Freud and Jung’s patients went on to become therapists themselves, and in many cases close collaborators. Alongside great male contributors to psychotherapy there have also been many exceptional female theorists and practitioners but interestingly they are often not widely known.

There are some very powerful Jungian writers like Marie-Louise von Franz who worked extensively on myths and fairy tales, and Marion Woodman and Clarissa Pinkola Estés who introduced Jungian thinking to popular culture and offered precious work around the feminine. Anna Freud and Melanie Klein made some of the most significant contributions in psychoanalytic child psychotherapy. Lou Andreas-Salomé, was an early psyhoanalysts of great intellect and mystique, and one of the first women to offer psychoanalytic thinking on female sexuality. Karen Horney’s critique of Freudian misogynistic premises led to the development of feminist psychology. There are also Mary Ainsworth’s founding contributions in attachment theory, Virginia Satir’s founding contribution in family therapy, Francine Shapiro’s development of EMDR, Margaret Naumburg and Edith Cramer who are widely credited with being the first psychotherapists to use and promote art therapy.

The list is bigger than that and spreads across all sections of the field, and it gets even greater when one considers that female practitioners today by far outnumber male psychotherapists. Some say that this has ‘feminised’ the profession, and some argue that this is perhaps a compensatory reaction against the early misogynistic basis of psychology and psychiatry. In any case psychotherapy as a profession is closely aligned with feminine qualities and values, and men and women that work in this field need to develop and nurture these within themselves if they are to be of service to the deep psychic spaces they are called to care for.

Throughout history our feminine/right hand brain functions that involve creativity, arts and emotions have been suppressed. In today's world we are seeing more people exploring ways to help understand this side of them, what advice would you give someone going through the motions?

The metaphor of left and right brain hemisphere has captured the imbalance between what society values and imposes through its various structures, and the totality of who we are within. In this metaphor the right brain hemisphere that has been largely repressed and devalued, is linked with our creative, fluid, intuitive and embodied centres. This is the space of imagination, symbolism, and spiritual awareness. The rise of involvement is hopefully marking a collective move towards restoring balance and reclaiming different ways of knowing and being in the world.

The development of any new skill or capacity needs commitment as it grows steadily the more one works on it.  Consistent space for practicing is key in mastering new abilities. It can be very beneficial to create a daily practice and space for bigger or smaller acts of connecting with our more fluid selves. There are infinite outlets for ‘right brain qualities’: from music, to art, to creative storytelling, to guided visualisation, meditation, dancing, creating sacred rituals, playing, allowing spontaneity, free-writing and association, day dreaming, engage your senses, and endless more. We can either choose or be chosen by any of these.  It can be an individual practice or it can be participating in a collective practice.

Such paths support the development of heart intelligence. But we need to always be mindful that the ultimate path is one that integrates and offers us syncretic support. Integrating left and right brain functions, integrating cognitive and emotional knowing, integrating masculine and feminine energies, honouring and drawing from both, will support us more thoroughly in how we exist within ourselves and in the wider world.

Who is your ultimate female role model and why?

It is very hard to just mention one as there have been so many women, known and unknown, that are part of a feminine lineage that has inspired me enormously and continues to do so. I will make a symbolic choice rather than an absolute one, and I would say that one of the most profound women I am inspired by is Frida Kahlo. She is a strong female voice that has carried feminist, anti-colonialist, minority, and non-conformist ideals. She has stood authentic, wild, and naked, in close embrace to her explorative journey of who she was and how she existed in this world. Her life and work were incredible containers for her indigenous cultural identity, her spirituality, her feminine journey, her wounds, the disturbing, the explorative, and the creative. She is a deep call to cultivating a true presence.

How do you define female empowerment and what positive steps could someone take to achieve this?

Female empowerment comes when we stand in our true sense of self, power, path, and purpose. It is a point of union with a greater sense of Self. Reclaiming feminine sovereignty is about becoming responsible for freeing ourselves from externally imposed limitations, and making choices based on a deep knowing of our identity and purpose, with our bodies and intuition grounding us in our feminine wisdom.

Locating the feminine and her qualities is the first step in being able to access her.  The archetypal feminine is extremely powerful, immensely vital. She is the source of all, the matrix of creation. She is embodied and heart centred. To restore the feminine to it’s true power requires us to cultivate a relationship to the deep cosmic source of our psychic lives and come to care for all creation. The divine feminine asks us to transcend divisive ideologies, to hold a responsible presence on this planet, and to foster emotional intelligence for the generations that are to come. To support female empowerment we have to challenge the systemic nature of all oppressive ideologies.

In addressing and restoring what society has suppressed, in honouring the feminine in it’s potential wholeness, in celebrating feminine wisdom and knowing, we can operate from an inner space that is more sovereign, confident, authentic, interdependent, and whole.

Leave a reply Click here to cancel the reply